Posted in Woodworking Tips by Bruce On April 13, 2016. No comments

Metric does have its Advantages.

Here in Canada we swapped from the Imperial system to Metric a long time ago.  Being brought up on Imperial I still have issues thinking how long a metre is compared to a yard.  But slowly but surely I am getting there.

I use both when I am building something, especially when there is addition and subtraction involved.

One thing that still causes a problem is lumber here is still sold in a 2×4 and lengths in feet.  But the thickness of a 2×4 is not 8.5 mm thick ( 1 1/2 inches) but is closer to 9mm.  So if a pattern is in cm, then I have to decide if I am going to trim the lumber or adjust the plan.

The difference is so small, that I usually just ignore the .5mm difference.  Plus I do not like working with fractions.

I ran across this trick about using 2 rulers for doing the fractions with Imperial sizes.  It is basically the same concept as the slide rule, but much simpler. 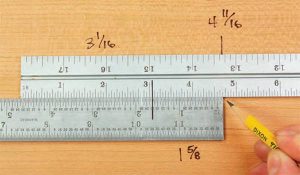 Here’s an old carpenter’s trick for solving fractions that works either with two tape measures or steel rules. If you need to add or subtract two fractional measurements, place the two side by side and align them according to the lengths that need to be added or subtracted. It doesn’t matter if the denominators of the fractions match, because you’re simply comparing two distances, not computing two fractions. For instance, in the photo here, 3-1⁄16″ (top rule) + 1-5⁄8″ (bottom rule) = 4-11⁄16″. The ends of their overlaps tell you the sum. Subtract the same way: the end of the overlap minus one rule’s length shows you the answer. No complicated math required.